The complexity of this project encompassed removal and replacement logistics and phasing. All of the air handlers were shipped in sections in order to be lowered into the basement through the outsider air intake; moved into their respective equipment rooms and assembled.

The first air handler to be installed was rated at 40,000 cubic feet per minute and was placed in a new equipment room located in the abandoned laundry. It was ducted to a common supply duct served by the old air handlers. Upon completion of the ductwork, piping, electrical work and controls a shutdown was schedule and the new air handler supply and return ducts were attached to the common ducts.

The new air handler was started and three of the old wire handlers were shutdown. This allowed the demolition of the three old air handlers.

A new 30,000 cubic feet per minute air handler was placed on a new equipment pad and assembled in the place of the built-in air handler. Utilities over the location of this air handler were relocated to allow the extension of the supply plenum from the first two air handles. Piping, ductwork, electrical service and controls were installed. The supply duct was connected to the extended supply air plenum.

The last unit was started. Testing and balancing was accomplished.

The project duration was eleven months. 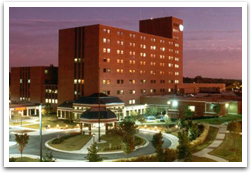